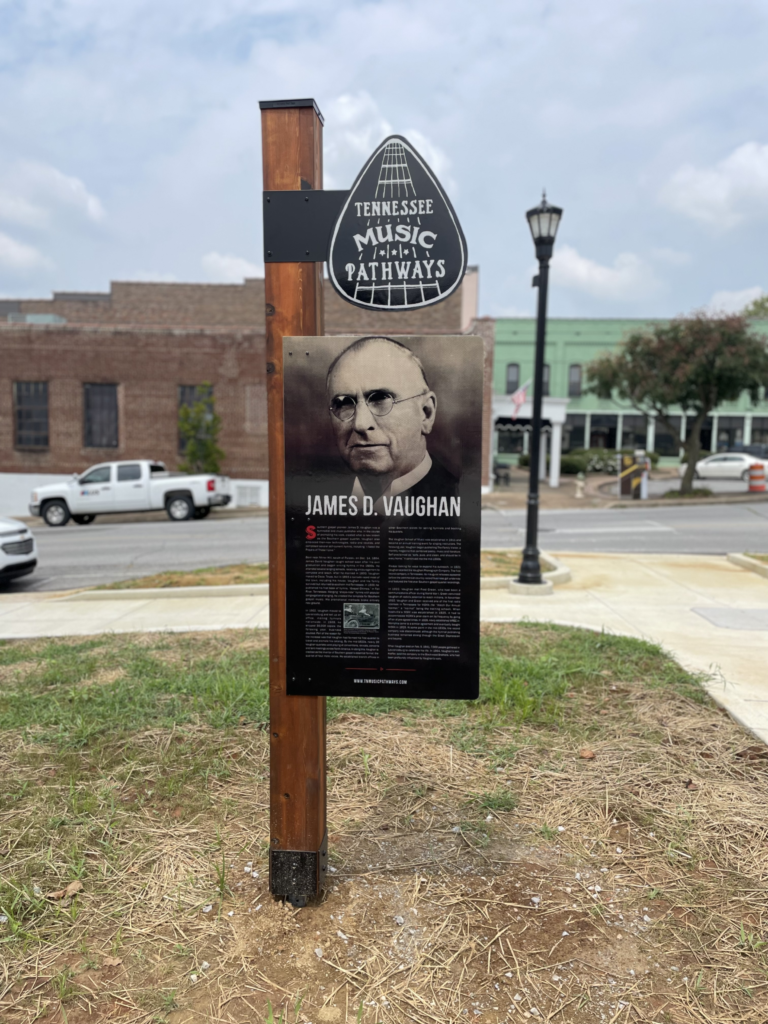 LAWRENCEBURG, Tenn. – August 5, 2021 – The “Father of Southern Gospel Music,” James D. Vaughan was honored by the State of Tennessee with a new “Tennessee Music Pathways” marker in front of the Lawrenceburg Municipal Complex. The unveiling took place on Friday, July 30, 2021, at 10:00 am.

Vaughan, who was a songwriter, teacher, publisher, promoter, and entrepreneur, had a prime interest in music from a young age. He and three of his brothers attended a music school where they all learned to sing do-re-mis and started their own Gospel quartet. Their quartet was a fore runner of the many gospel quartets that crisscrossed the nation a few years later.

In 1902, Vaughan moved to Lawrenceburg, Tennessee and founded the Vaughan Publishing Company that produced millions of songbooks using the shape-note system, designed to help teach songs to groups of people. The Vaughan Publishing Company grew steadily in the early years of the 20th Century. In 1909, the company sold just over 30,000 Gospel song books, and in 1910 he more than doubled this number.

In 1911, James D. Vaughan expanded his music empire and established the “Vaughan School of Music”. This school was held annually and grew until it was necessary for instructors to work almost around the clock. Aspiring Gospel singers from across the United States came to Lawrenceburg to receive instruction in all phases of music. Given that the “Father of Southern Gospel Music” established this school, Lawrenceburg was deemed the “Birthplace of Southern Gospel Music.”

Last week was the James D. Vaughan Gospel Quartet Festival at the Historic Crockett Theater, which is held each year during the last week of July. Each day there were performances from Southern Gospel quartets at the festival’s concerts and matinees. The James D. Vaughan Museum, which displays early printing tools and broadcast equipment, songbooks, scores of photographs, musical instruments and other memorabilia from this early music mogul, also received many new visitors during the week.

“Today, our community is full of talented musicians that can trace their roots to Southern Gospel music,” stated Lawrence County Chamber President Ryan Egly.  “I want to thank the Department of Tourist Development and the City of Lawrenceburg for honoring James D. Vaughan and his contribution to Tennessee’s musical legacy through the installation of this new marker.”

Photos from the event can be found here.

Launched by the Tennessee Department of Tourist Development in 2018, Tennessee Music Pathways is an online-planning guide that connects visitors to the state’s rich musical heritage at tnmusicpathways.com. From the largest cities to the smallest communities, Tennessee Music Pathways stretches across all 95 counties and features hundreds of landmarks from the seven genres of music that call Tennessee home: blues, bluegrass, country, gospel, soul, rockabilly and rock ‘n’ roll. Historians identified more than 300 points of interest to date, and additional markers will be installed for years to come.

The Lawrence County Chamber of Commerce is a network of businesses, industries, local governments, utilities, and private citizens that are committed to improving the quality of life in Lawrence County, Tennessee through economic development, community development, tourism marketing, and workforce development.